How to Be a Burden to your Children 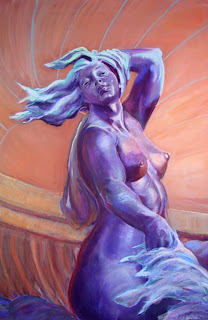 "The Librarian of Congress"

The above is one of my many unsold paintings. I am rather fond of it.  Still, it sits in a basement rack with many other paintings I'm fond of.  In ten years of painting, I have been prodigious.  I chalk it up to the excitement of discovering a talent late in life.  Just last year I produced 40 paintings. (I was painting for two shows.) More than half of them are now stacked in my dining room.  In twenty years of writing, I  wrote five novels, a two food reference books and hundreds of recipes.  All of which fit neatly in a several cartons in the basement.  (The wolf spiders seem to enjoy curling up with these.)   I can't help but wonder what will become of the paintings.  I will never be famous or in serious demand.  Reasonable people might suggest I stop painting.

I've donated dozens of paintings to the Art League Patron show over the years. My friends and family's houses are already clotted with my paintings.  I've whited-out many pieces and reused the canvases for new work.

When my mother died, my brothers and I wanted her few remaining paintings. Spirited words were said.  And when I die, my kids will fight over who gets my paintings.  But neither will want custody.
Posted by richmondlikethecity at 2:45 PM No comments:

A Proclivity for Raw Poultry ? 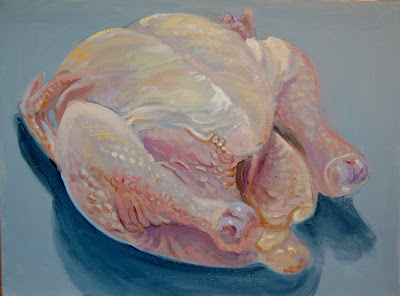 People thought it odd that I chose to paint a raw chicken for my food show.  At the time, I had no idea that raw chicken had played a part in an earlier creative endeavor.  I was rereading my novel, The Mother Load.  It was published in 1986. The lead character is a starving actor.  In this scene, she has accepted her first job.  She is to play a chicken at a poultry farmers' convention:  "When the costume arrived, I pulled off the casing and stared dumbly at the contents.  If this was a chicken, where were the feathers?  With horror, I realized my professional debut was to be in the role of a plucked pullet.  The costume was the shape of a six-foot headless chicken. It was coated with a noxious, pale yellow, lumpy polyurethane.  On the breast was a large tag that read, "Lickin' Chicken."  Licking seemed inadvisable.  You certainly wouldn't want to eat it.  There were small eye holes in the breastbone but no air holes.  The costume smelled like a chicken--one that had been left on the counter for several days."
Of all the things  lurking in my subconscious, I never expected raw chicken to make an appearance. Twice.
Posted by richmondlikethecity at 2:19 PM No comments: 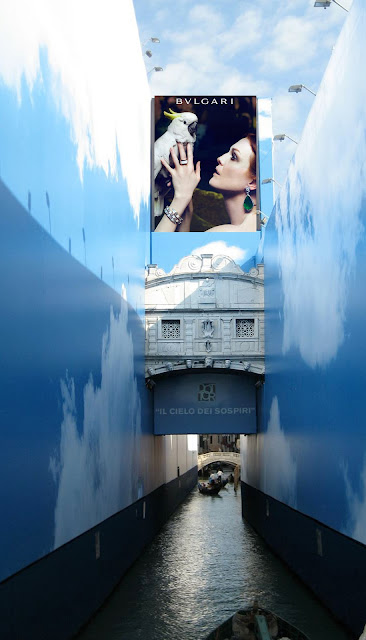 This is a picture that my brother Randy took in Venice.  It is of the Bridge of Sighs, where the condemned had their last breath of fresh air.  The powers that be in Venice thought it was a swell idea to cover both sides of canal leading to the Bridge of Sighs with enormous faux skies replete with advertising. This cropped image eliminates much of the advertising along the sides of the canal but leaves Julianne Moore on high.  Italy seems to have gone to the dark side. A few years ago, I found a huge banner of a half naked man promoting Sisley clothing hanging over most of the buildings at one end of the Piazza Navonna.  When I took pictures of the Neptune fountain the ad was unavoidable. 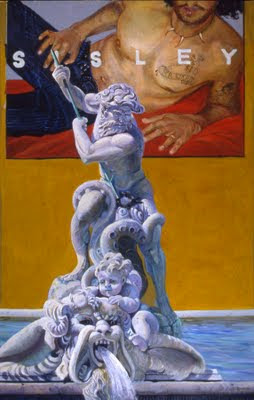 I liked the juxtaposition of art and commerce("Roman Gods: Then and Now"). Over 5 feet tall, it took me months and months to paint.
My brother thought his photo of Venice would be a natural partner to the piece.  I stretched another huge linen canvas and began painting a month and a half ago.  I had a great title: The Bridge of $ighs. 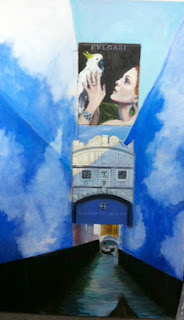 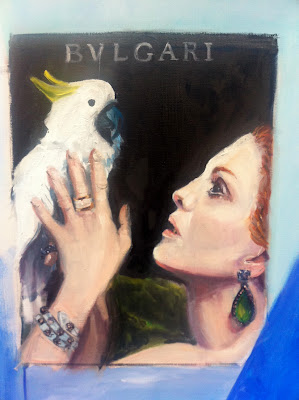 Yesterday, as I was explaining the work in progress to a visitor in Studio 3  I remembered something I learned  as a writer.  Whenever I had a play of words that required research to perfect (this was long before the internet made such quests a snap), the effort expended was an inverse proportion to the likelihood it would be used.  Unless someone had been to Venice, this painting would always require explanation.  So, yesterday, I chucked it, whiting out the piece.
Posted by richmondlikethecity at 2:10 PM No comments: 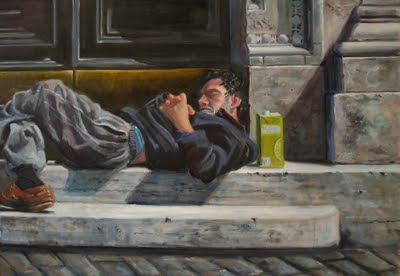 Boy, when people drop you, they drop you.  Just last month I had 30 people a day reading my blog.  Now, nada.
Posted by richmondlikethecity at 6:32 PM 1 comment: 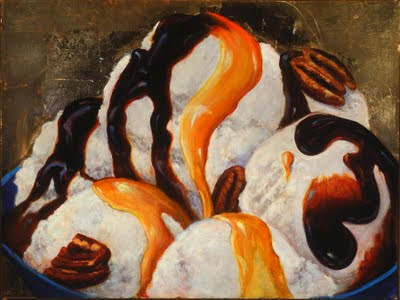 Sad but true, the party's over.  I took down "Food, Glorious Food" today.  But don't despair, the Torpedo Factory is having its Spring Open House this Friday, May 6. Some of the pieces from the show will be in Studio 3, and I will be offering a 20% discount many paintings. The theme of the Torpedo Factory party is Flora and Fauna.   At Studio 3, it will be Flora, Fauna and Food!
Posted by richmondlikethecity at 7:24 PM No comments: