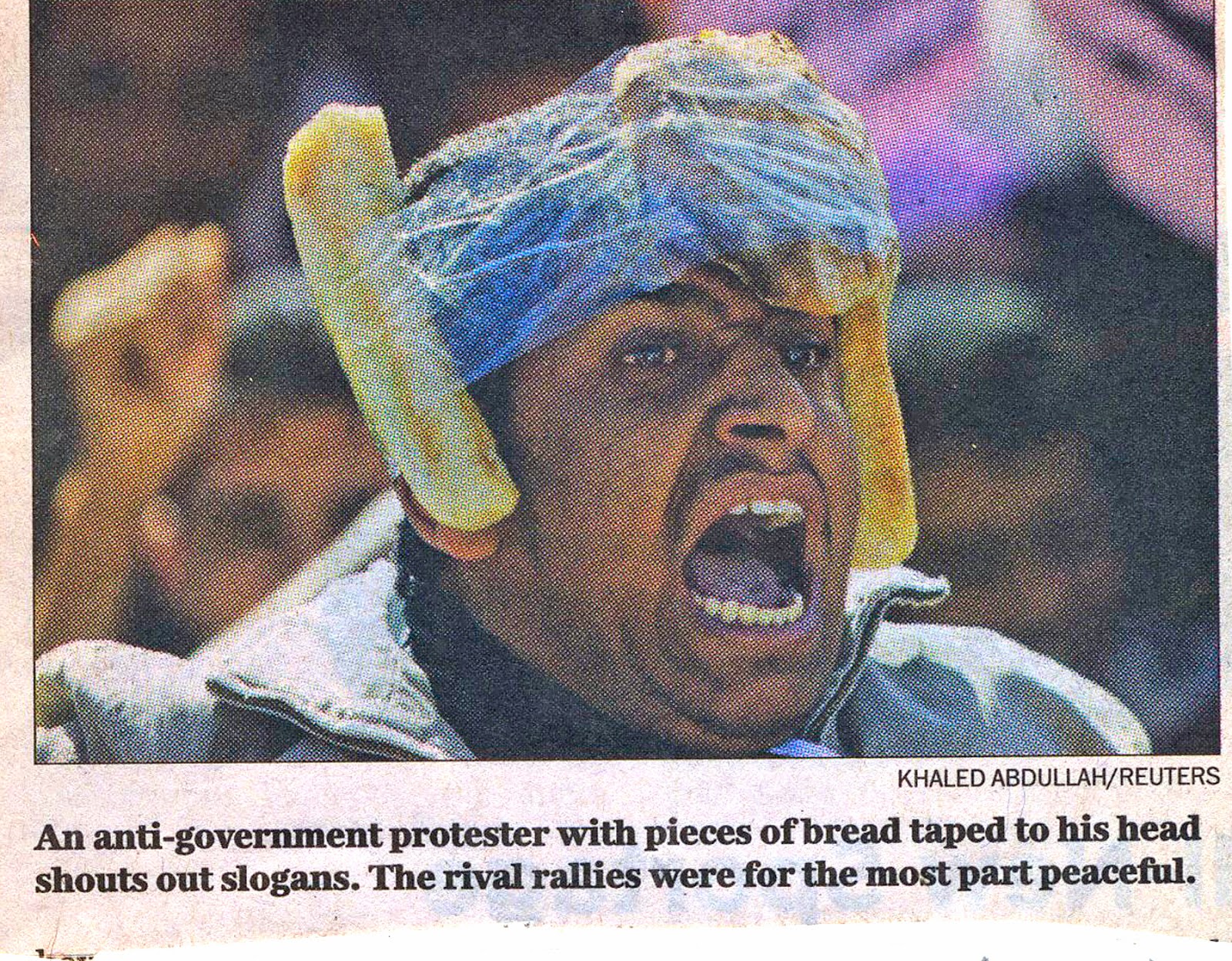 A good friend, Judy Yavit, is a world traveler.  She has brought me many gifts.  In hindsight, my favorite was a blank notebook she gave me in 1992.  Now, it is nearly full of  quotes, political cartoons and things I found funny, odd or provocative.  Today I am going to share lighter fare.

The above image is from the Washington Post, from February 2011.  As the caption states, an anti-government protester in Yemen "with pieces of bread taped to his head shouts out slogans."


From Pam Houston's, Cowboys are My Weakness: "He'll be gone six weeks.  I asked him if he wanted to make love.  He was just lying there, you know, staring at the ceiling.  He said, 'I was just trying to decide whether to do that or go to Ace Hardware.'"

Richard Russo in Nobody's Fool:  "She had married a man whose idea of luck was road kill."

Zanne Early Stewart, of the late Gourmet Magazine: "He's like the man who knew how to spell banana but didn't know when to stop."

Alice Thomas Ellis, The Sin Eaters: "Ermyn was asleep on her back and Lilliputian insects were considering how best to break her up and carry her away."

The late Molly Ivins described Arnold Schwarzenegger as looking like "a condom stuffed with walnuts."

Gravestone in Kilmarnock, Virginia: "I told you I was sick."

Mark Helprin decrying modernist art as a function of totalitarianism,'there are a thousand abstract segments in a Raphael, but not a single Raphael in an abstract.'


Richard Russo, Empire Falls: A maitre d' in an upstate New York Italian restaurant, "Do you have reservations?"  "Who wouldn't?"

Michael Holroyd's autobiography of his life as a poor little rich boy: He retreated to the world of books, "which the family borrowed from the local library and baked on principle to kill off the germs."

My husband: "Is there stress after death?"

Zoe Heller Everything You Know: "Lately when I lie on my back, I have noticed it (her stomach) swerving away, settling in a puddle of flash at my side.  In the mornings, I wake to find it lying next to me, gazing up at me like an affectionate haggis."

Ford Motors hired poet laureate, Marianne Moore, to come up with a name for what was ultimately called the Edsel.  Some of her suggestions; Resilient Bullet, Mongoose Civique, Varsity Stroke, and my favorite, Utopian Turtletop.

The National Tartar Association has decided that men should wear underwear under their kilts.  One indignant Scot said if he were to wear any underwear, it would be made of twigs.

Eric Newby, Slowly, Down the Ganges: the author approaches a group of Indians warming their hands near a funeral pyre.  He says, 'It's a good fire.'  One replies, 'Yes. It is a woman."

And lastly, Willem de Kooning: "An artist is like a man at the circus, standing off by himself, trying to balance on one finger.  The point is, no one asked him to do it."
Posted by richmondlikethecity at 3:57 PM No comments: