No Hands on Deck

I am mystified by my attraction to dinghies and sailboats.  I don't want to sail or to dingh, if that's a verb.  When I was a child we had a small sailboat and Boston Whaler.  My father taught me to sail much as he taught me to swim (as one might a dog, with a mighty heave ho.  I don't even dog paddle well.)  My memories of sailing are sketchy, involving mishaps  of one sort or another, becalmed, stranded on a sandbar, blown out to sea etc.  Once I was out with my brother, Randy, when the day dissolved into a windless fog bank.  We had no idea where shore was but Randy figured that wasn't catastrophic as there was no place deep enough in the bay to drown.  He was taller but I was the one forced out of the boat into the bay to pull us to land.  Or in circles, as it happened.  He still sails to this day (it wasn't his feet stepping on squishy marine life).
The Boston Whaler was supposed to be invincible.  The ads said you could saw it in half and still float.  But like all things nautical, it wouldn't stop on a dime, leaving me forever leary of brakeless transportation.  The only way to stop it was to bump into something solid.  This was frowned upon by both my father and the owner of whatever solid object I butted .(My older brother, Vance, would occasionally run the whaler onto the beach to stop it.  Vance was the only one who knew how to fix the boat, so I guess that gave him certain privileges.)  My worst solo trip involved a problematic gear box.  I couldn't get it to go forward. I had to navigate through the harbor full of  yachts backwards.
That may explain why I don't paint motor boats, but none of it explains why I  paint so many wooden boats.  Nor, why I am so very fond of my brothers.
Posted by richmondlikethecity at 6:26 PM No comments: 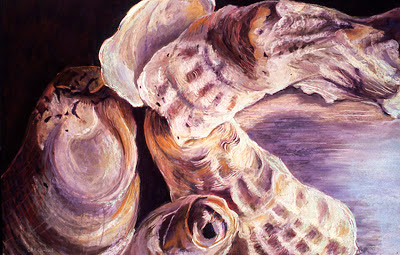 "Oyster Strew" copyright 2007
In England, after a long day in museums and maneuvering up and down the seemingly endless stairs of the Underground, we boarded a crowded train.  I held on to a pole.  Suddenly, a young woman stood up and offered me her seat.  I used to do the very same thing in New York City in the 70s.  I did it for old people.  Rather than being grateful, I gasped, "Do I look that old?".  She smiled.  I took the seat under protest.
This week I bought annuals for the garden.   Later  I noticed the clerk had given me a "seniors" discount.  She hadn't asked if I was over 60, she just assumed.  Isn't that a presumptuous social gaffe?  Shouldn't she ask and then look stunned or at the very least surprised that I am so old?
I feel like I'm forty-five.  Perhaps I should look in the mirror.

Posted by richmondlikethecity at 4:56 PM No comments: