Of Lanterns and Dragons


This was the first in the series.  It sold and admit, I miss it.
Posted by richmondlikethecity at 3:04 PM No comments: 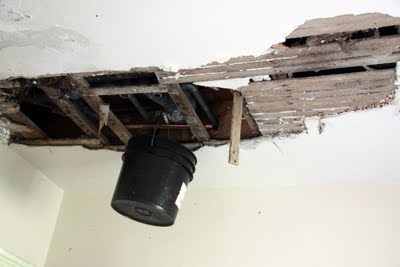 Family members have suggested that I cease and desist from airing family business in this blog.  And for God's sake, don't let the tenants read it. Okay.  But before I go back to less pressing subjects, the above is a photo of the last time (in the 1990's) the kitchen ceiling collapsed from a leaking toilet.
Hope Irene is kind to us. Our insurance policy has a $20k deduction, and no coverage for wind damage.  Oops,time to cease and desist...
Posted by richmondlikethecity at 8:52 PM No comments:

My kingdom for a Plumber 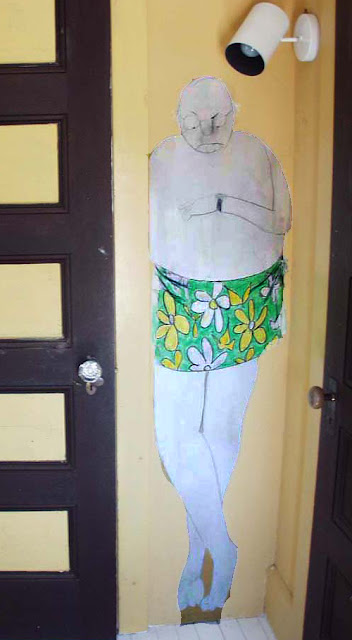 The other side of the bathroom cartoon wall (see previous post) was drawn by another New Yorker cartoonist, Charles Saxon.  Time is of the essence.  This point was driven home earlier this summer when looking for a someone to install a dishwasher.  As I may have mentioned (ad nauseam), it is difficult to get a repair person to come to our little  island which is off of a bigger island.  Long line-ups for short ferry rides make our destination unattractive.  I had begun to believe installers were mythical creatures.  We finally snagged one.  I thanked him heartily and gazed adoringly for the 75 minutes he was in our kitchen.   I felt good about humanity that day.  I offered to pay him on the spot.  He demurred.  Weeks later I understood why.  The bill arrived for $485.  (The dishwasher itself only cost $475.)  We were charged $90 an hour, for labor and travel time. He was there one and a quarter hours.  Three hundred plus was for travel time.
Had I known a regular plumber could have done the job, I would have called the man who has worked on the pipes forever.
He has the good grace to hide travel time within his bill.  Last week he fixed the leaking bathtub behind the cartoon wall.  I don't know if the kitchen ceiling is collapsing.   Best not to ask.
Posted by richmondlikethecity at 11:49 AM 1 comment: 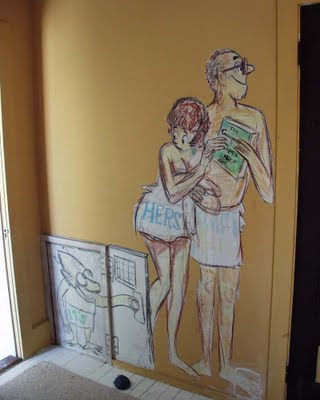 The above is painting done by the New Yorker cartoonist Whitney Darrow.  It has a place of honor outside a "new" , circa 1970's, bathroom that was added to the old Victorian home on Martha's Vineyard.  My father hoped the second full bath might improve rental opportunities.  (Hard to believe people weren't flocking to rent a seven bedroom house with one-and-a half bathrooms and an outdoor shower.)
We rent out the house in the summer to cover expenses.  There is a sign directing tenants: "If all else fails, call Cindy"
This summer has been particularly fraught with house woes.   There was the explosion of the mouse population between rentals.  (We had an empty week) The house cleaner sent expressive emails with photos of the 'mouse pup'. The mice revisited while we had new tenants.  They (the tenants) apparently found this unsettling.   I don't know if the mice were bothered.
Then, a lightning storm blew up the wireless transformer for the house.
Then, the propane tank for the kitchen stove ran empty as the gas company neglected to fill it in May.
My phone was ringing every other day.  Not so, the house phone on the Vineyard which did not work at all.  Most people bring cellphones.  They work pretty well at the house, as long as you hang yourself outside a second floor window in the northeast corner of the house.  Some tenants have resorted to calling from a ladder.
Which brings me to today's woe.  The plumbing for the 'new' bathroom, which hides behind the "It's/ creature" door is leaking.  And apparently dripping with menace through the floor to the ceiling of the pantry.  The tenants who reported this have rented the house before and are not alarmed by legions of mice, mosquitoes and the occasional skunk.  But they did think we would want to know the kitchen ceiling might collapse.  They were wrong.  I don't want to know these things.
Posted by richmondlikethecity at 3:43 PM No comments: 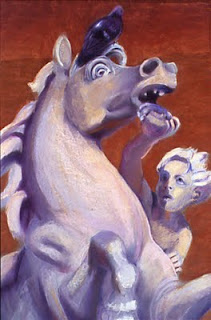 I've been quiet for a while.  When I was a writer, I forced myself to write everyday, just for the discipline.  For the first time in years, I'm not painting everyday.  And it's making me nervous.  I can't settle on what to paint.  I have many options.  Perhaps, too many options.  I shift through the photos, hoping something will  compel me to paint.  So far, just a chorus of wannabes.  I sketch and sketch and wallow.  My muse is clearly on vacation.  She'd best be back soon!
Posted by richmondlikethecity at 5:02 PM No comments: