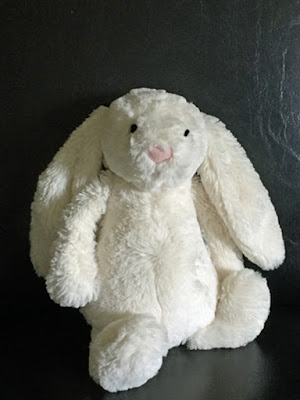 I am bereft.   No grandchildren to enjoy, no dogs to walk.

One dog, Rosie,  of the Quentin Tarrantino Christmas saga, has been banned from the house.  She is a sweet pit bull that was once a bait dog for fights.  It is small wonder that she has anxieties.  Her parents went to Seattle for nine days.  We were held hostage for the same duration.  If left alone she tried to chew her way out. 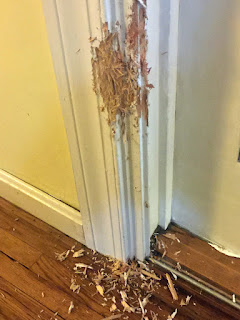 Last Christmas there was no blood shed, but when we went out to dinner, she tried to tunnel out the front door.  She gave the back door a half-hearted go.  She was more earnest this time.  She passed on the marrow bone in favor of the trim (which was liberally doused with the chewing deterrent, bitter apple)  My husband went to the grocery store and came back to a shredded door frame.  After that, one of us had to be where she could see us.  After six days, I thought she was settled in.  Lots of licks and kisses.  I ventured out.  My board meeting ran long.  She re-attacked the above spot and then started a new hole two feet away.

My other granddog, Sam, used to be a lunatic but age has calmed him.  He still talks or rather grumbles with dispiriting regularity.  But a good dog.

Which brings me to the hardest bit.  My son, his wife and two children (seven weeks and 17 months) and Sam, left for TWO years in Korea today. 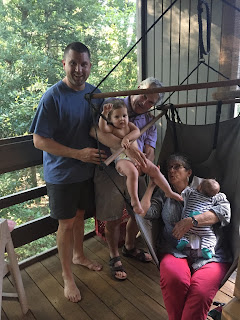 This will be a bold, new adventure.
Eventually, I will be happy for them.  But not just yet.
Posted by richmondlikethecity at 3:09 PM No comments: