Books of a Feather 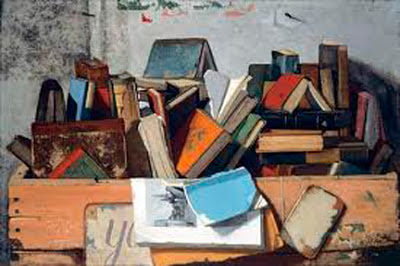 I love books.  Who doesn't, you might suppose, but there are those among us who do not read.
I come from a family of writers.  My father wrote best sellers.  My mother wrote and illustrated "Jerry the Giraffe" in 1945. (The copyright page affirms "This is a wartime book produced in full compliance with government regulations for conservation of paper and other essential materials.") One brother has written several well-received scholarly books.  And then of course, I added to the pile of felled trees.
My daughter, a voracious reader, designs books.  She could make more money if she took her skills elsewhere, but she loves finding 'her' books in stores.
Last post I was de-cluttering the house.  If I were serious about purging, I would start with the books.  But I can't.    Books aren't 'friends', as some have claimed.  But the good ones become a part of you, echoing throughout your life.  I would never treat books as they are pictured in Peto's painting (above) but I do mark passages and turn down corners.  Some pages may sport the occasional food stain.  My father was even more vigorous with his books, sometimes tearing whole chapters from the binding (to be used as research).  Not just for the mind,  books are visceral, meant to hugged or even thrown across the room.
My husband is a steady reader.  We used to share books.  No more.  I bought him a dreaded kindle for Christmas as his heavy computer bag was tearing at his joints.  Secretly, I hoped he'd hate it, as I know I would.  He loves it.  Bastard.
In the late 80's I could not find a publisher for my fifth novel.  My agent called to say I had been offered a contract for an electronic book.  I laughed and said, don't be ridiculous. No one is ever going to read a whole book on a computer.

Posted by richmondlikethecity at 3:15 PM No comments: 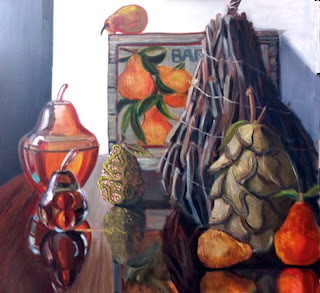 People like pear paintings, or so I hear.  Not only do I have several pear paintings languishing in my inventory, I still have all the artificial pears from the above painting.  Multiply that times countless still lifes and then add 'possible' still lifes.   My husband has complained often that our house is stuffed to the gills.  He issued a directive: 'nothing comes in unless something goes out.'  For years I have smiled and nodded and then snuck in still life objects while he was on the golf course.  When bad weather strikes, and my back is turned, he de-clutters.  He doesn't tell me what he has tossed. This is insidious on so many levels. I spend months searching for something never knowing if it is even still in the house.
This weekend I bought a French tin ribbon wreath at Great Stuff by Paul.  I tried to hang it and realized to my horror, my husband was right.  There is not a blank 14" wallspace left in the house.
So I am purging.  Emptying drawers and cupboards with abandon.  It feels great, until a month from now I need something I tossed.

Posted by richmondlikethecity at 2:17 PM No comments: