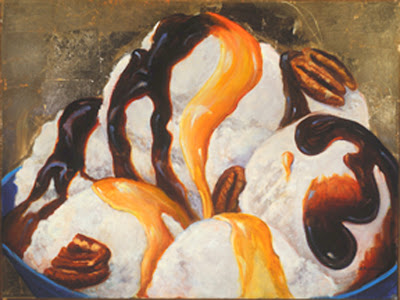 No sooner had I announced my triumph over lymphocytic colitis then the gods took offense and whacked me with another bout.  I am gluten intolerant and still have lymphocitic colitis.  I hope the gods are happy.

It was actually two days before I got the attack.   I have been known to embellish.  No really.

Perhaps exaggeration comes from being a novelist.  But it has begun to haunt me.  There are parts of my first, partially autobiographical novel (Hell's Bells, available on ebay for a penny) that I no longer know if happened in the real world or in my head.  We did have a shark scare on the Vineyard one year.  My mother didn't particularly like to swim, but was stalwart about daily exercise.  Katama Bay was mostly murky with an abundance of squishy vegetation.  You wouldn't have caught me in there before the shark scare.  Time Magazine had published an article that (I believe) said sharks avoid  yellow and should be deterred with a blunt instrument.  I wrote that the mother character swam in a screaming yellow tank suit and carried a hammer.   I assume that was fabrication, although I know she often swam in a leopard skin patterned tank suit.  My parents were great characters and had no need of embellishment.

I tell people how my father's office (he was a writer) was next to where my mother painted.  One day he made a comment about a painting. She took it off the easel and hurled it at him.  Subsequently he moved his office to the other end of the house.  I believed this to be one of my fictions, so I was startled to learn it was the truth.  In 1958 or thereabouts, my father was interviewed on Person to Person. I watched a grainy tape of the show recently.  My mother, who went gray in her late thirties, looked like a bombshell blonde on black and white television.  She introduced me as her "chatty" daughter. And then she told nation the story about lobbing the canvas at my father.

Does it matter if a story is true?  I think it should, but I'm pretty sure that as the embellisher, I am ill equipped to judge.
Posted by richmondlikethecity at 5:30 PM No comments: 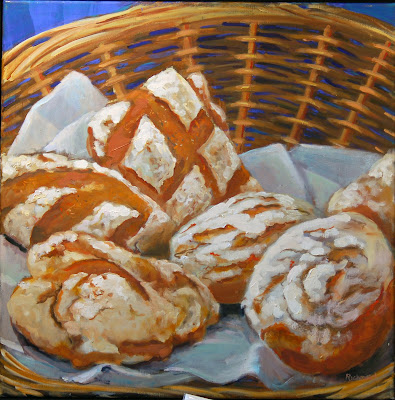 Two years ago I got the runs, the kind where you visit the commode 12 to 18 times a day.  Machines thoroughly ransacked my innards for information.    The doctor ruled out celiac disease.  I remember being so glad as I couldn't imagine a life without wheat.  He told me that celiac patients can not even use the same toaster as normal people because of cross-contamination.

The bad news was that I had lymphocytic colitis.   The doctor told me I fit the disease's demographic. I guessed he meant old, white, overweight and female.  He chuckled.  Even worse news, there was no proscribed treatment. All he could offer was hand-me-down medicine.  We'd pretend I had Crohn's Disease.  Whooppee!

The treatment involved taking 3 steroids a day for a month, then 2 pills a day for a month and finally 1 pill a day for a month.  The doctor said I could expect 3 to 4 attacks a year.  That is 9 to 12 months of steroids a year.  I've never known anyone to advise long time steroid use, but I had no choice.  I did my first three month cycle, went steroid free for 6 whole days before I had to start another three month cycle.  It was insane.  The steroids made my voice squeaky.  The slightest pressure on my arms would create angry, red, puffy bruises. Seeing my hands, people would look away quickly, embarrassed by my condition.

I tried to outsmart the colitis.  I went to acupuncture. I drank vats of Aloe Juice. I meditated.  I took Vitamin K to stop the bruising.  I took Curcumin to reduce inflamation.  I took dreadfully expensive pro-biotics.   And still I had to take steroids.  I played little games, shortening the cycle of the pills.  I gave up fresh fruit.  I gave up nuts.  I gave up liquor.  I gave up chocolate.

Then one day I gave up wheat.  I almost hoped it wouldn't work.  But it did.  I may not have celiac disease but I am gluten intolerant.  I have been off the steroids for two months but I still erupt in weird bruises.  Is it too much to hope that long gloves come back in style?


Posted by richmondlikethecity at 2:35 PM No comments: 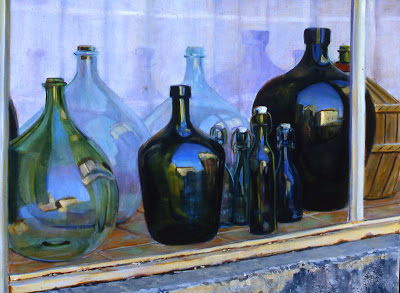 "Provence in a Bottle"

It has previously been noted ("Oh say, Can I see?" January 3, 2012 blog) that I have trouble seeing that which I am painting.  Several teachers have chided me for "not looking."  A recent critique accused me of greedily rushing ahead when I should be pausing and focusing.  All of this is sadly true.  Another comment, "Cindy mistrusts her eye and inner makings of balance,"  got me thinking.  Well, that and the fact that I have fallen twice in as many weeks.  My physical therapist, who is all that stands between me and back surgery, says I am "a crooked old lady."  Uneven hips, collapsed cartilage, a touch of scoliosis.   I do fall more than the average adult.  And without grace.  My husband remarked, after I went face first into the Palantine Hill in Rome, that I "went down like a tree."  I don't think he was talking saplings, either.

I used to enjoy a walk in the woods.   But Nature is  lost on me as I can't afford to look.  I am  focused on the ground, where tree roots, mud and tangled vegetation try to bring me down.   Ironically, my last two falls were on  sidewalks, where I was silly enough to think I was safe.

So maybe my physical imbalance has rippled into my creativity, causing me to rush ahead as I paint.  To finish before I fall...
Posted by richmondlikethecity at 2:52 PM No comments: