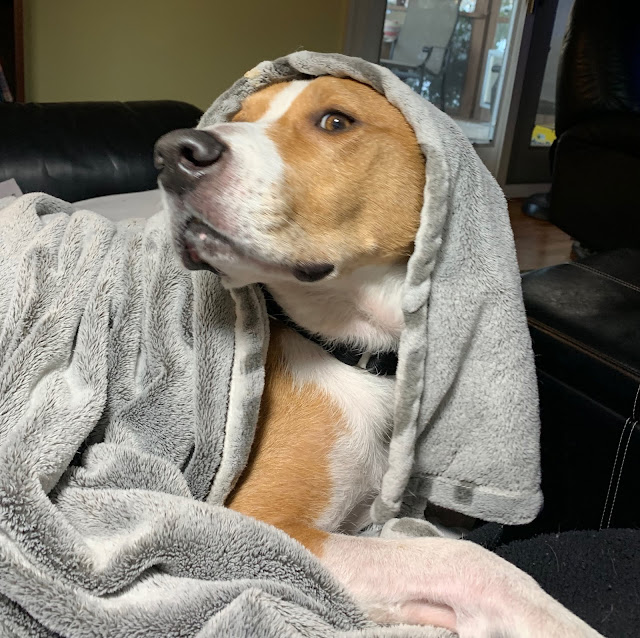 Cloaked as a sheik, Sam tried to fool us, to escape unseen into the night. Today he is scheduled for his second knee repair in eight months. Sam is my son's dog, who is living with us for two years.
I do love Sam.  When we took Sam in last summer he was a dynamo, requiring more than an hour of exercise a day to be just rambunctious.  He raided the garbage, humped every person, dog or pillow within his reach, and whined through the octaves for hours at a time.  But even with all that,  he is a better dog than he was seven years ago (see "Run, Roo, Run" from 2012 blogs).
His last surgical recovery was a very long slog for all of us. Twelve weeks of confinement, two months of limited exercise.  When he blew out his other knee a month later, we keened.  We vowed no more expensive surgery.  But Sam is a runner and a jumper. To see him hobbled and dispirited broke our resolve.
Also, daily CBD oil has made him sweeter, less anxious.  He hasn't raided the garbage or humped any one or thing in a long while.  His argumentative vocal sessions are shorter.
We took Sam in to the vet hospital this morning.  Other dogs on the surgical docket were there before us.  Sam commenced baying and wouldn't stop.  I had never heard him bay before.  I suspect he was trying to incite a canine revolt but his intended conspirators were lily-livered.


Posted by richmondlikethecity at 3:29 PM No comments: