Dancing on her Grave The above photo from the Sixties shows my mother dancing a jig on her newly purchased grave.  Formerly Wampanaog Indian land, it is now home to many non-natives. My mother died a slow, debilitating death that made a mockery of  her zestful life.  I love this picture because it reminds me of the woman she was.  It's sometimes hard to erase the memories of her final 12 years when she was a decidedly different person.   It reminds me of something Cormac McCarthy wrote in All the Pretty Horses: "It was good that God kept the truths of life from the young as they are starting out or else they'd have no heart to start at all."   I'm not young but, as I intend to be buried there as well, I hope it doesn't become an Indian casino.
Posted by richmondlikethecity at 2:14 PM 2 comments: 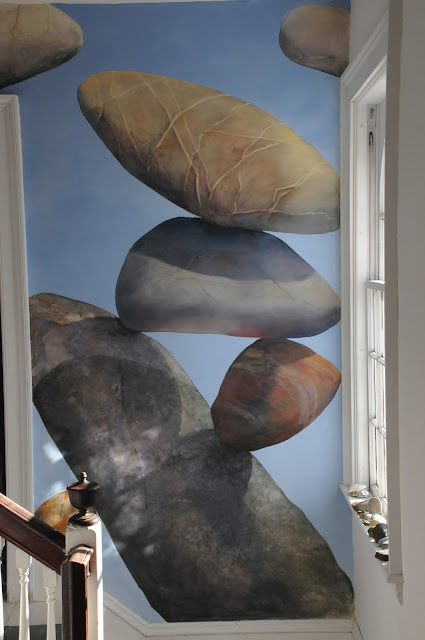 The above mural was painted by Susan Makara and is at the top of the family history staircase (see previous blogs).  This wonderful painting was the result of an offhand remark by my husband to Susan when she was visiting in 2009.  The majority of it was accomplished in twelve hours with house paint.  She returned this summer to finish the details.  The cracks in the stones cover cracks in the wall.
This is surely the best house guest gift ever, and we've had our share.  The worst came from a couple who arrived with two children, left them in my care and went off for 'alone time.' Their gift? Two jars of jelly.  Oh, yum.....
Posted by richmondlikethecity at 2:45 PM 2 comments: 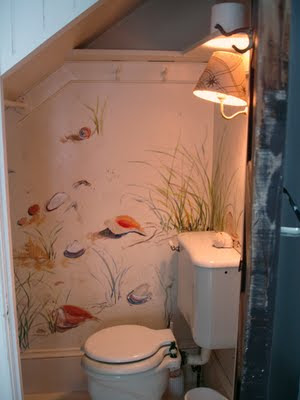 Beneath the family history stairs (see previous blog) is a tiny bathroom that slants all the way to the bottom of the staircase.  The toilet is ancient but sturdy.  As a child, I would sit and study the map of New England that was taped to the underside of the stairs.  The map disappeared years ago.  In the 1990's (before I fancied myself an artist), I tried to paint a beach scene.  Where the map once ruled, there are now big, anatomically incorrect, footprints.  I should correct the images, or at the very least paint a Baedeker open in the nearby sand, but I won't.  They show me how far I've come.
Posted by richmondlikethecity at 2:59 PM No comments: 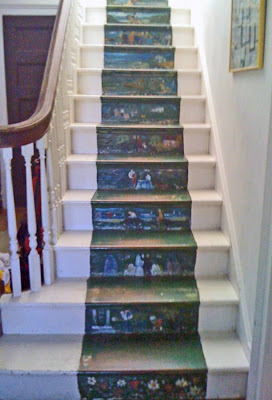 My mother, the artist Virginia Packard, didn't limit her painting talents to linen.  The kitchen of the Vineyard house sported  fish swimming around the upper walls.  The joke was that each fish was larger than the next.  Regrettably, those walls were painted over many years ago.  Her family stairway, however, remains in tact. It tells the story of my parents meeting, marrying, honeymooning on Martha's Vineyard, family births, house moves and more.  Each child had a stair.  My eldest brother, Vance, was shown tinkering with cars. Brother Randy played guitar and wandered around Europe. My stair showed me astride my horse.  Then, my brothers' marriages were registered.  Alas, both of those marriages failed.  So there, as far as Mom was concerned,  the story ended.  And so it remained for several years.  Frankly, I was more than a little irked. I, who had graduated, married and had children, was stuck for all time on my horse.   Two years ago, I decided to right history.   The marriage stair was tricky. I considered painting red Xs through the ousted brides. (Yes, I'm known for my tact.) In the end, I added the new brides' names.  And, of course, my darling husband.  The next stair belongs to the grandchildren: Amanda, Kendra, Matt and Ned.   They of course, have lives, spouses and children of their own to add.  But we are fresh out of stairs.
Posted by richmondlikethecity at 4:22 PM 1 comment: