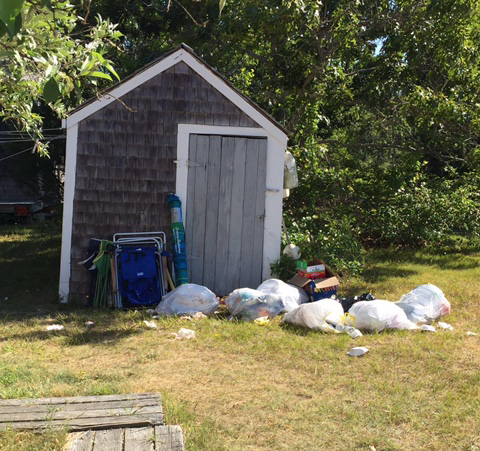 You get all sorts if you open your house to strangers.  Not everyone is a happy camper.   Every season has its highs and lows.  But this year we had, in rapid succession, the alpha and omega of tenants.

My mother loathed being a summer rental landlady.  My thirty year tenure cemented my antipathy. When I first took over managing the house in 1985, my Sunday mornings were a nightmare of cranky tenant calls.  (We advertise house as being eclectic.  Maybe some folks took that to mean we had electricity.)

Some complaints were legitimate but most were not.  I love this house.  The complaints felt like scurrilous attacks on my child.  The house is 111 years old.  Something is always going south.  Try as we might to anticipate every problem, it is not possible.

My husband, the new landlord, was determined to get a five star rating with our very first Home Away rental.  He really went the extra mile with new sofas, new games for teenagers, new life jackets, new cooktop and a very nice bottle of wine.

We waited anxiously for their response.  Bless them, they loved the house.  It reminded them of their childhood summer home in Rhode Island.  They remade all the beds with clean sheets (which the cleaner assumed were dirty and removed).  Two of the guests wrote lovely notes.  My husband was flying high.  A grateful shout out to the Maron/Ryland family reunion.

The next tenants had rented from us before, so we weren't worried.  Upon leaving, the tenant wrote an email saying they had had a great time.  They reported they had taken the garbage out. (This seemed odd to me as what else would you do with garbage?  We have a special shed for the garbage cans.)

As an afterthought, she noted the upstairs toilet appeared to be backed up.

Decorum prevents me from showing the toilet as my brother found it the next day.  It was beyond putrid.  The plumber required a special tool.  The garbage which they "took out", was scattered on the lawn.  Not even near the appropriate garbage shed.  Many woodland creatures treated it as a pop-up Old Country Buffet.


But that was just the beginning.  My brother found bed pads reeking of urine with sandy beach towels lumped underneath, ripped chairs and broken shades.

If a tenant had arrived instead of my brother, we would have had to put them up in a hotel (as we did two years ago when a bat was spotted).   This family had rented from us before.  Now I wonder if they were the crew whose teenagers stuffed empty airline-size bottles of liquor in the toilet, necessitating another plumber bill.

My home had suffered a frat party. The Omega House.

Posted by richmondlikethecity at 2:47 PM 4 comments: