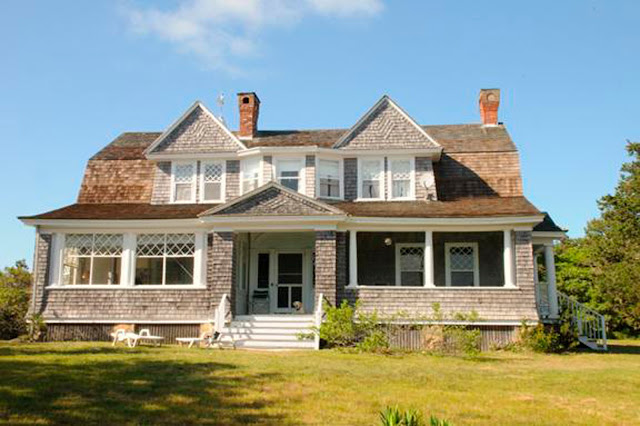 I feel a rant coming on.

In 1953, My father bought this house on Martha's Vineyard.  The sellers wanted $16,000 for the house, several vermin infested out buildings, 25 acres and 1000 feet of beach front.  My father was married to an artist, had three children and wrote freelance.  (Verily, not a pot to piss in.)

Negotiations were protracted as both owners suffered from narcolepsy and thus fell asleep at inopportune times.  We children waited in a rental house over the bluff.  Given the fractious nature of my brothers, I was probably lashed to a newel post with poison vines.  It was dark by the time my parents negotiated the price down to $8,500.

Summers were spent there.  My brothers and I  have always thought of it as home.
(We were a sentimental lot before my parents deeded it to us in 1985.  Before we had to pay for upkeep, repair and taxes. ) My father didn't just deed the house to his kids, he included their spouses.  I suspect he thought joint ownership would preclude divorce.

For the most part, we get on.  The six of us share the decision making, a process I liken to moving a 14 foot cube of jello with a spoon.

The taxes, repairs and upkeep amount to a sum so tidy we cannot keep the house without renting it through the summer.  Early on, it was decided, (as  I "didn't work,"), I would handle the rentals and keep the accounts.   I am the official fiduciary, which means if there is anything hinky with the taxes, I go to  jail.

For twenty-nine years, I did the paper work, fielded the complaints, cajoled plumbers, begged for service calls and kept the balance pennies above overdraft.  Eventually my sister-in-law took over the tenant complaints.  For years, if anything went awry, tenants were directed to call Cindy.

When my husband retired, I dumped it all on him with glee.  The other four owners are well pleased with his organized approach to finances.  I find this patently unfair.  So he knows how to use spreadsheets, big deal.  He has also secured new tenants through HomeAway and VRBO.

It hasn't been all smiles and kisses.  He has dealt with problem tenants.  But he is too damned nice and reasoned to be effective.  Sometimes you have to be a hard ass, or maybe just an ass.  Luckily, I am in-house counsel.

Posted by richmondlikethecity at 5:40 PM No comments: 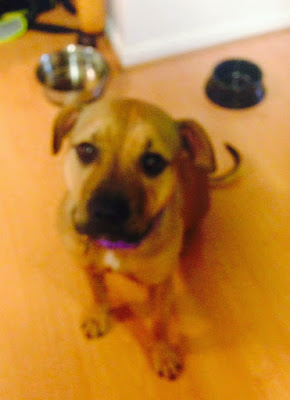 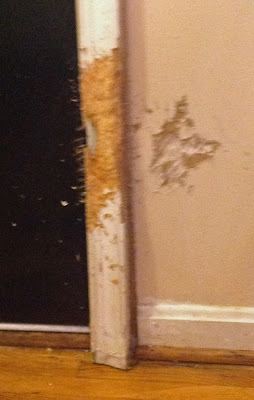 Canine drama this Christmas was mild, no thousand dollar vet bills.  Sweet Rosie, my daughter's rescue pit bull, has been at our house many times.  The first time, when left alone, she clawed her way into the room where her mom would be sleeping.  She later spent 9 days with us, wallowing in our affection and abundant treats.
This year Rosie arrived Christmas Eve with her parents.  We waited an hour before going out to dinner  to settle her.

Ninety minutes later, I unlocked the door and saw a shredded mess on the floor.  I assumed she had ravaged the christmas presents. But, no, the shards were wooden.  Rosie had tried to chew  her way through the front door.  Another hour and she might have made it.  The trim had been chewed down to the dry wall.  She also attempted a back door escape.

I understand the urge.

No, actually, I don't.
Posted by richmondlikethecity at 1:00 AM No comments: