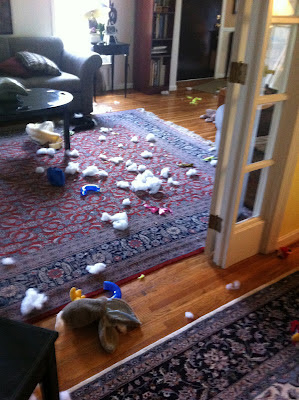 When last I posted, my son was about to leave me with his bundle of terror, Sam, the possible pit bull.    He casually mentioned  that Sam could leap over a couch from a standstill.  I didn't believe them.  Now I'm  convinced Sam is a four-legged pogo stick on meth.  He bounces through the house at warp speed.  At night, when I'm watching tv on from my bed, Sam dashes in, leaps over me to the other side of the bed. Then jumps back on the bed, over me and to the floor.  Repeatedly.  He finds this endlessly amusing.  I find it less so.   He also enjoys shredding things. See above.  In effort to divert him from my pillows and sofas, I offered him stuffed animals I picked up from a garage sale.   Daily sacrificial animals, if you will. I've run out of sacrifices with 8 days left. I could offer up a raw chicken, but then he's allergic to chicken ( and beef, lamb, rice, duck, salmon, venison.)  He's on a kangaroo and red lentil diet.  (I don't think I actually believed that until I saw the bag of food.) Sam prefers objects he can sink his teeth into, so nylabones are ignored.  He loves squeaker toys, or rather loves to  eviscerate the toy and render the squeaker mute.  I tried the "indestructible" toys.  He munched through them in a trice.
Did I mention that he is often sweet and cuddly? 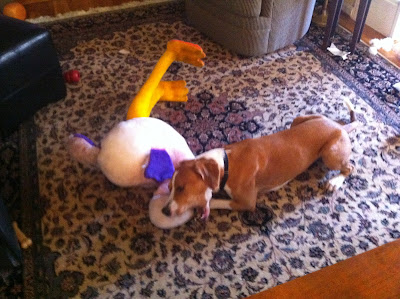 The four-foot flamingo was the last of the garage sale animals.
Beneath the fuzz was a hard layer wrapped around a core of styrofoam pellets.  I didn't want the pellets all over the living room so I put the flamingo in the yard.  Sam spent 10 minutes trying to drag the wide flamingo through the narrow dog door.  It took some maneuvering, but he succeeded.  And when I wasn't looking, loosed a geyser of styrofoam all over the porch. 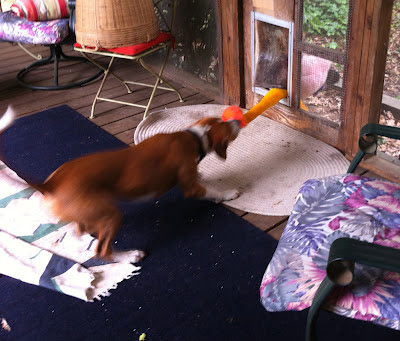 I told my son before he left on his honeymoon that if his plane went down, I was not adopting Sam.  He laughed and said, "Yes, you will."  Drat.
Posted by richmondlikethecity at 2:53 PM No comments: 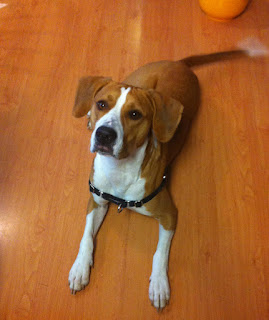 My son Ned read my blog and announced that it was depressing.  I was going for "wry."  Ah well...  So, in the interest of happy thoughts, I present my grand-dog Sam.
(I told my son not to adopt a dog, that he couldn't afford it.) What do I know?  Ned rescued Sam, a mixed breed.  Ned insists
that Sam is part pit bull, and is unreasonably proud of it.  Everyone knows that mutts are healthier than pedigree dogs. Everyone but Sam, who cost my son and his fiance a small fortune in vet bills.  Major food allergies.  For awhile, the allergy went into remission with zyrtec and a limited diet of venison and sweet potato.  Alas, that didn't work and he's now on a diet of (I kid you not) kangaroo and red lentils.
I see Sam every week.  I've petted him twice.  He never stands still long enough to receive affection. He zooms through our house as if he's going for a land speed title.  At home he chews the normal things, rugs, shoes, hands (Sam doesn't seem to know where the toy ends and the human begins).  One day he chewed a hole in the middle of their memory foam mattress.  Yes, he's a rascal all right. 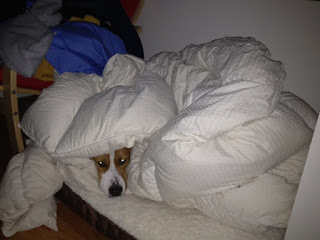 My son is getting married next week. Sam is not attending.  While my son and his wife honeymoon, Sam will zoom through our house for two weeks.  I will lob pellets of kangaroo and red lentil at him as he passes by.

Posted by richmondlikethecity at 4:27 PM No comments: