Will Bleed for Art, part two 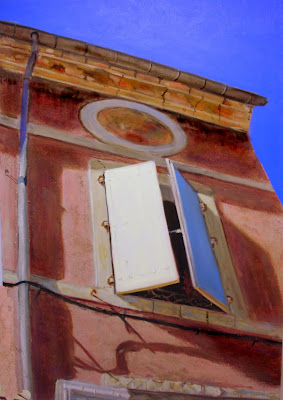 What vacation is complete without a trip to the emergency room?
I was on the Vineyard, scraping the stairs again.  If I thought about it seriously, I would be tempted to believe the wretched stairs spend each winter shimmying and bucking off the paint like an ornery uncle.
Last year, when kayaking, I found a hidden inlet that I wanted to paint.   So with the scraping done, my son and I took the kayak across Poucha Pond.  My sense of rhythm is irregular and clearly not suited for team sports.  There was much zigging and zagging.  And muttering from behind.
The inlet was as I had remembered it.  (Sadly, the photos bear no resemblance.)  On the way back to the kayak, I stepped on something sharp in the water.   I know I am a gusher. My skin is very thin.  It's not a problem as I'm not heir to a throne, and the blood clots eventually. Last year I got knocked down by a roguish wave, managed to keep my camera above water but gashed my knee.  My daughter panicked at the sight of so much blood.  As did my son.  He may have mentioned sharks, but by then we were on land.   I took care of the wound at home and slathered it with anti-biotics.  Two days later it was off to the hospital with an infected foot.


Posted by richmondlikethecity at 5:13 PM No comments: