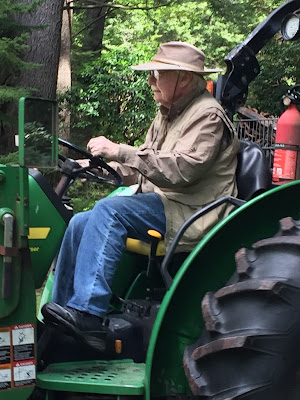 I have two big brothers. This is the eldest, Vance.  I used to describe him as barbed wire wrapped around cotton candy.  Most would just describe him as cantankerous.  When I was little he sprinkled Tabasco sauce over random jelly beans in my Easter basket.  If he'd sauced them all, it would have been better.  I would have thrown them all away.  This way I was in constant suspense as I picked my way through candy landmine.  He shares a birthday with Hitler, which I've always thought explained a good deal.  He had a tender side but few people other than his wife saw it.

Vance was an Industrial Archaeologist in Pennsylvania.  The man can fix anything and solve just about any problem.  We would not have been able to keep the family house on the Vineyard if not for him.  He is also a wiz with woodwork, building dining room tables, cabinets, cradles, castles and doll houses.
He traveled the world and and sent me gorgeous photographs from which I paint.

But fate has been unkind to Vance.  Nine years ago his short term memory left him.  I don't know if it's from Lyme Disease or Alzheimers'.  He no longer barks commands, but asks for help.  Those of us he once 'supervised' are uneasy.

I spent a few days with him this week.  He still has a sense of humor which, like mine, is fairly mordant.   His long term memory is active.  The two of us spent 8 hours one day going back in time.  Over that span of hours, he repeated one story seventeen times.  His wife later told me the story wasn't true.  Vance now conflates the truth with imagination.

We are more alike than I thought.  I wrote two novels that reflected my family in a comedic vein.   Problem is, I no longer know what is true and what I made up.

Posted by richmondlikethecity at 2:01 PM No comments: