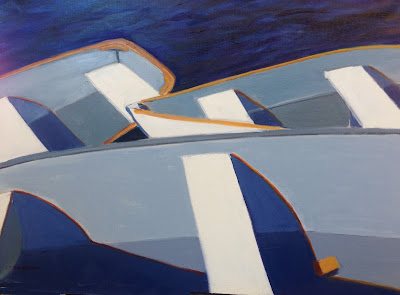 No one of my acquaintance would consider me a minimalist.  In any regard.  It is probably too late in life to try to curb my 'enthusiasms'.  The other day, Sheep Jones, a friend and an artist of the first rank, was looking at a photo of an intended subject: 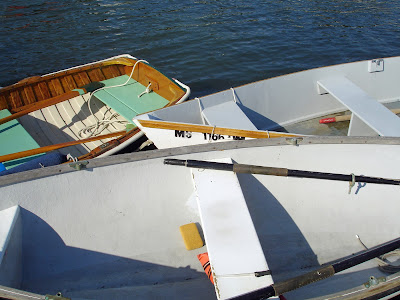 I wanted to make the composition more cohesive.  I had the red of the life jacket in one, the red of the oar handle in another, and the reddish wood in the third.  But how to introduce the green into the other two?  Sheep suggested I remove the green altogether.  Remove the oars, ropes and life jackets.  Go minimalist.  Be more contemporary.
"The Shape of Things #1" was the result.  Sheep agreed if that it doesn't sell in six months, I'm allowed to revert to detail. And if it does sell, I have to do a minimalist series.  Win win. 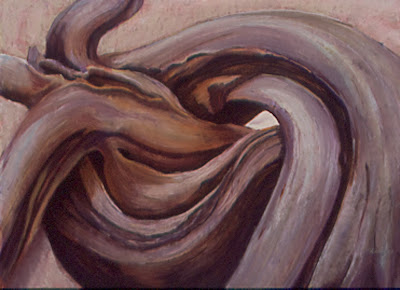 It's an odd day, violent rain and a husband home, furloughed by the government shut down.  As I exercised in the basement, I listened to a Jay Mohr podcast with "E" of the band  Eels.  Turns out "E's" father (Hugh Everett) was a quantum mechanics physicist, who, at 24,  discovered the concept of parallel universes.  The theory was shot down by a contemptuous Niels Bohr in the late 50's and Everett's academic career ended.  Hugh Everett died at 51, before the parallel universes theory gained stature.   "E" never knew his father was a "physics rock star", in fact knew little about him.  Disconnected.  His search to understand his father's life and work resulted in documentary "Parallel Universes, Parallel Lives".  Like "E", I knew nothing about physics.  This film,  available on www.eelstheband.com, explains quantum mechanics in a way that even I understood.  His journey is fascinating and endearing.  Towards the end of the film, "E" finally looks through the boxes of his father's papers that have  been moldering in "E's" basement and discovers tape recordings his father made.  It's been 25 years since he heard the sound of his father's voice.  He is reluctant to listen.  He hits 'play' and hears his father talking about the theory to a visitor and, in the background, the sound of "E" playing drums in the basement.
You never know where exercise will lead you.
Posted by richmondlikethecity at 1:15 PM No comments: