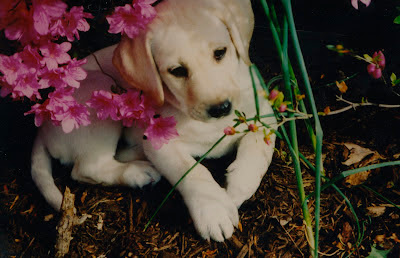 The last time I had a puppy, my mother was in the end stages of Alzheimer's.  Our beloved black lab had died the week before-- the same week my mother moved to a nursing home near me.  I visited her twice a day.  Alzheimer's units are more like  lunatic asylums than assisted living facilities. If it hadn't been so disturbing, it might have been funny in a twisted, black way.  Clio, above, was the picture of innocence the day we got her.  Little did we know her penchant for vegetation would become a mania.  When her ball hit a bush or a plant, she took it personally.  She became quite adept at ripping plants from the ground and limbs from their trunks.  She also had a cute trick of flinging full water bowls across the room. And she ate all of our azaleas.  I remember clearly sitting at an intersection between the nursing home and my puppy's home, realizing that I did not want to go to either "home".
I introduced Mom to Clio.  They didn't get on.  My mother died soon after.  Clio grew to be a wonderful soul.  The two are entwined in my mind, alpha and omega.  Maybe that is why I never got another dog.
Which brings me to the new beginnings.  My brother's family had a great bulldog, Dozer, that died early and unexpectedly.  They wrestled with the idea of getting a new dog.  They waited months and months.  Cody, the dark blob to the left, is a gentle beast of a chocolate lab.  He greeted the new bulldog, Tucker, with great good humor, even as Tucker treated Cody's ears as chew toys.  My grand nephew, Max also enjoys tussling with Tucker.  He is size appropriate.  Max was to be christened in New York City. So I went to Baltimore to babysit the puppy.  He's adorable , aside from his razor sharp teeth.  Still in housebreaking stage, he had to be carted out to the yard hourly.  He took exception to my policing of chewables.  I spent the day in near constant motion: ferrying him to the pee and poop zones, keeping him away from the duck pond, removing sticks, dead habiscus, and stones from his gullet.  It was a long day.  I'm so happy my brother has gotten a new puppy.  And that I don't want one. 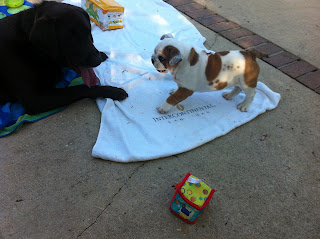 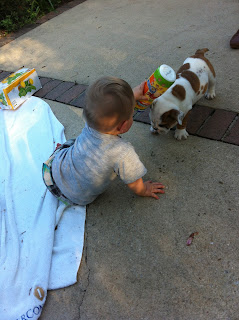 Too Much Information Alert 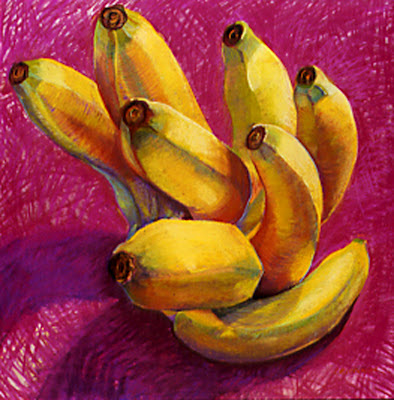 If I am known for anything, artistically speaking, it's as a food artist.  Clementines, mussels, raw chicken...I have painted them all with love.   I have a complicated relationship with food, loving it, apparently, to excess.  Painting it, writing about it, devouring it.  I looked forward to every meal of the day. "Five a day" fruits and veggies/whole grains/ high fiber was practically my religion.
I need a new religion.  I have lymphocytic colitis.  They don't know how to treat it other than to carpet-bomb the colon with steroids for three months.  My perky doctor told me I could expect 3 to 4 attacks a year.  (Do the math: 9 to 12 months a year on steroids.)  Usually I have a month between attacks. This last one came on after only a week and was particularly vicious.  My acupuncturist used this as further evidence of my spleen qi deficiency.  (Previous evidence, food cravings, heavy menstruation and bruising).  I could no longer ignore the diagnosis.  To build up qi and rid the 'dampness', she has banned all cold foods, fresh fruit, fresh vegetables, dairy products, garlic and onions, sweets, red meat and alcohol from my diet.  I'm left with white fish, chicken, rice, bananas and root vegetables that have boiled and beaten into a submissive mush.   How can I give up tomatoes? And arugula, and apples?
She said I have to develop patience. I'm pretty much known for my impatience. But I'm trying.  I meditate and drink ginger tea.  And I wonder at the irony of being a food painter sustained by mush.
Posted by richmondlikethecity at 2:03 PM No comments: