'Tis the season of their Discontent 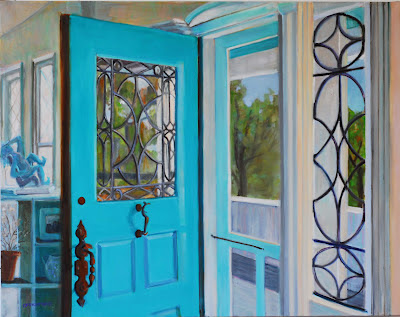 The rental season is upon us.  We (I) wait with bated breath for the first complaint.  My brothers posted a note for the tenants: "If there is a problem, call Cindy."  Most magnanimous of them.  I'm also the one who goes to jail if there is anything hincky about our finances.
My acupuncturist thinks my qi would benefit if I would envision  a place where I am "most me" and at my happiest.  I should do this whenever I feel tense and also when I meditate.  I immediately thought of the porch at the Vineyard.  I recall of the angle of the sunlight, the smell of the sea and the bayberry, the drone of the mosquitoes.  Happy place!
But it's a short jump from that porch to unhappy thoughts.  My mind is on the porch, feeling the breeze, and the next instant I'm thinking about the septic tank.  We have been stewards of the house for 27 years and I don't think we've ever had it pumped.  I remember vaguely that my parents had it done.  I believe it is under the yard in back.  No telling where the opening is.  Probably six feet into the brambles. My mother told me as a child not to play in a certain corner of the yard, but was that the septic tank or the underground root cellar?
If thinking makes it so, I expect a call soon from the tenants, to report that the back yard is bubbling and ripe with odour.
Happy, happy...
Posted by richmondlikethecity at 3:16 PM No comments:

Lions and Tigers and Bears, Oh My! 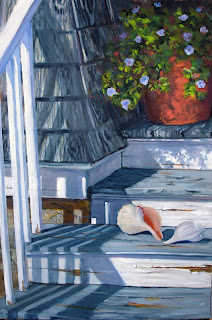 Last night I attended the opening of my show "Summertime" at the Jarrett Thor Gallery in Colonial Beach, Va.  It was quite the exciting party what with the fire trucks and the ABC (Virginia Liquor Board) on site.
No doubt you expect I set the gallery ablaze.  Not so.  Turns out my opening was scheduled for the same night as the annual Fire Truck Parade.  Fire trucks from Maryland and Virginia, with horns cranking and wailing, drove through the tiny town of Colonial Beach for 45 minutes.  It was rather like being locked in a bell tower.
To add further merriment, an agent from the ABC liquor board dropped in, flashed her badge, and demanded that the gallery stop serving wine.  Apparently, the agent felt that the wine was unduly influencing people to buy art.  (I mean really, how else are we to peddle the stuff.)  No one was buying art at the moment, but the agent was not dissuaded.  The wine was corked and put away.  Sigh....
Posted by richmondlikethecity at 3:16 PM No comments: