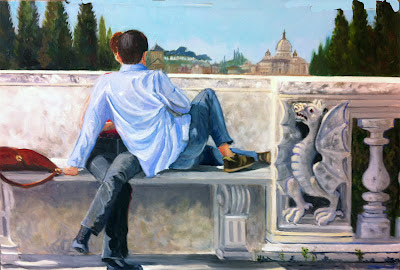 Sometimes when painting a piece, I can feel that it will sell.  One such piece sold off the easel.  Several that I know will sell are still waiting for their owners to claim them. Or to be born...   Then again, sometimes I know when a painting  will not sell.  The above, "Roman Love Triangles" is one of those.  It is from a photo I took in 2002.  I loved the dragon in the balusters staring at the the oblivious couple.  I doubt many people will share my amusement, but that's okay.  There's still room in my basement.
But I am baffled by consumers who buy, not because they love the painting, but because of its inches.  I was in the Torpedo Factory studio when a couple came in and pulled out a measuring tape.  They held it up against several of my partners' pieces and mine as well.  Then they left.  An hour later they came back, measured again.  I wondered if they would pull out fabric swatches to see if it matched the sofa.  They left again.  When they returned they settled on a piece that was 24 inches tall and was mostly red and yellow.
People should buy art that they love.  Repaint the room or buy a new couch, if necessary.  But love the art.
Posted by richmondlikethecity at 2:51 PM